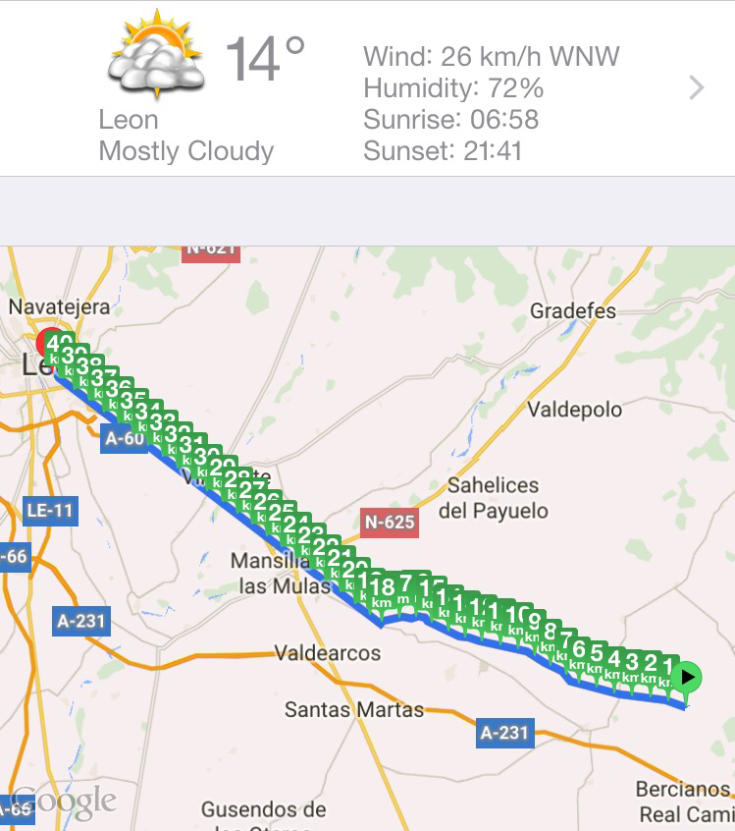 I had a really good night’s sleep. Very little snoring. There was some rustling at 5 am but I found them at 6.30 am still in bed. Apparently, Kay wasn’t feeling strong enough for the long walk and wanted another lie in. Part of me wished she had decided this the night before so that all of us had un-interrupted sleep. Because this albergue did not start their cooked breakfast till 7 am, a lot of people were hanging around to catch a warm meal before heading out.

Hmm, I really relish a hot cooked breakfast. Bacon and eggs with a little bit of toast, and cafe con leche. It makes the walk more enjoyable with hot food in the belly. As I ate, the big “party” group were having their meal. Actually, it isn’t so much the group as one person. As I observed from the sidelines, I felt this one individual to be attention seeking. He’s either giving advice, and of course he’s right – “listen to me, if I can walk 50km you can do it” – the various techniques of what you should consume and how, salts to add to your drinking water. All speaking loudly enough to so everyone else knows what an expert he is. It also interrupted my thinking process. Then he wanted music and played whatever he wanted. To be honest, he was rather irritating. The worst part of it is that though he thought he was being helpful, after he left the room, one of the people in the group said he doesn’t understand him and basically ignores what he says. Which I also thought was kinda rude. Anyway, they decided they wanted to carry on their noisy karaoke from the evening before with The Lion Sleeps Tonight. Personally I think the lion is still sleeping. And as the day, let sleeping lions lie.

Of course, for me, I had my “don’t disturb me” vibe. Don’t know why, but I never feel like being sociable at breakfast. I want to eat and get going. It’s not that I’m unfriendly, I guess I don’t make the effort to perk up and smile and say “Hi, can I join you?”

For what it’s worth, I liked the Roman Road. It was remote, very few pilgrims were on it, and I could sing and dance along the way. Not that I could dance too much as heavy boots and pack makes hard to jump up high.

After 12 km, I begin to feel a little something on the sole of my left foot. It’s like a pebble stuck in there though I know there is none. I’m feeling the blister moving further down on my sole, basically becoming bigger and bigger. Right now, I’m glad to make it Religios, but I’m not sure if it’s wise to carry on to Mansilla. The thought occurs that I should cut my losses and get straight into Leon where it will be easier simply to put my feet up and rest it, this, I begin to think is the only answer.

I go into Elvis’s cafe and the cutest bar owner is there. Both the bar and the bar owner have personality. He seems slightly mad, mind you, but he cooks the best meal in town and is super helpful to pilgrims. I meet Malaysians Christine and Gabrielle. I sit for a coffee. Even with great food, I am weary of the plato combinado – ensalata with the usual – pork, beef, chorizo etc.

In conversation, the girls talked about walking to mansilla and then catching the bus. I’m for some help. I know I can’t walk the 17 km to Mansilla tomorrow with a blister that’s growing and growing. I’m in favour of taking a taxi.

A beautiful air conditioned vehicle arrives to pick us up. I don’t feel guilty. If I’m to get to Santiago, I need to get off my feet. I’m sure the odd pilgrim would have hitched a donkey ride if one was offered. It cost us €25 to get into Leon.

We arrive at the Benedictine Monastery and a queue is already forming. I don’t tend to take pictures of where I stay as they never make attractive shots. Neither would this. I am shuffled through a women’s dorm. It feels like I’m back in school. A poster of a young John Paul II looks down on us. Guess he must have been the pin up poster boy for the nuns in the 80s. 😉

I think it’s funny that us pilgrims have gotten used to boys and girls changing in the same area all this time only to be separated for our own protection. Anyway, it’s nice not having  boys around.

I go out for a wander. I see a Burger King!!!!!!! I eat there for lunch and dinner. The Malaysian girls laugh at me. I bring the takeaway food back to the dining room. Other pilgrims look at me and chide me saying it is an expensive meal Umm, ok. Though it’s cheaper than the €10 I’ve been paying for rubbish on the camino.

I would have posted a photo of the burgers. But I ate them too quickly!