So, as you know, I’m trying to get into the habit of putting some runs on the board in terms of training for my Camino, which incidentally is in about 2 months time. (I can’t believe how quickly it’s now coming up.)  So I just came up with a simple route which is to walk towards Hampton, walk along the river and go as far as I can and catch the bus back.  An unconscious plan to create a simple enjoyable walk for myself to test my endurance for the real thing.

You know, I kinda missed the point of my environment. I’m walking along a route that people pay long haul airfares for to visit locations that just happen to be on the route I am walking.

Today, I am reminded of gratitude. For all I have been whinging about, I realised I get to walk past locations that others can only dream about visiting – Hampton Court Palace.  A palace loved by Henry VIII, who took it from Cardinal Wolsey, who gave up the palace to try to win favour for his inability to broker a divorce between Henry VIII and Catherine of Aragorn. I have been taking where I live for granted, where once (when I was living in Australia), I would be absolutely green with envy.  So I will share as much as I can about the little that I know about the, once, villages I walked through. For you history buffs, feel free to fill in.

I left from Twickenham Green, and took Hampton Road towards the River Thames.  The River Thames, as you know, snakes across London in a real loopy kind of way, so what I learned today is that villages weren’t very far away from each other if you travelled via the crow flies.  If you are rugby fans, you would know that Twickenham has a rugby stadium and that it is one of the locations hosting games for the Rugby World Cup.  Yes, I did try to get tickets to the Australian matches but they were really super expensive (like over GBP 200 up to nearly GBP 1,000).  I thought about it, and decided that the atmosphere of Twickenham and the telly would be sufficient.  Famous past residents of Twickenham include Alexander Pope.

Walking along Hampton Road, I entered the old town of Hampton Hill. Much of the sights along the way are bog standard sights of houses, and shops and car garages etc.  I did walk past the Fulwell Golf Course and wondered whether I would be inclined to take up golf.  It was a passing fancy. Maybe later after the camino.  Houses get interesting the closer you get to the river and you see many more houses of Georgian in design.  Many of these houses back onto Bushy Park, which would have connected to Hampton Court Palace itself.  In fact, the parks would have stretched from Hampton Court Palace, Bushy Park, Richmond Park, Deer Park and Kew Gardens in one length.

I walked along the river where there were many houseboats. You do see a few long canal boats, but most of the house boats on this stretch are 3 story mansions floating on water.  It amazes me what they manage to build. I used to think of house boats as temporary structures, but not these. These look fairly permanent to me, and with a price tag of up to GBP 1 million, you definitely wouldn’t want it to sink any time soon.  The good news is that if there is a flood on the River Thames, the house wouldn’t flood. 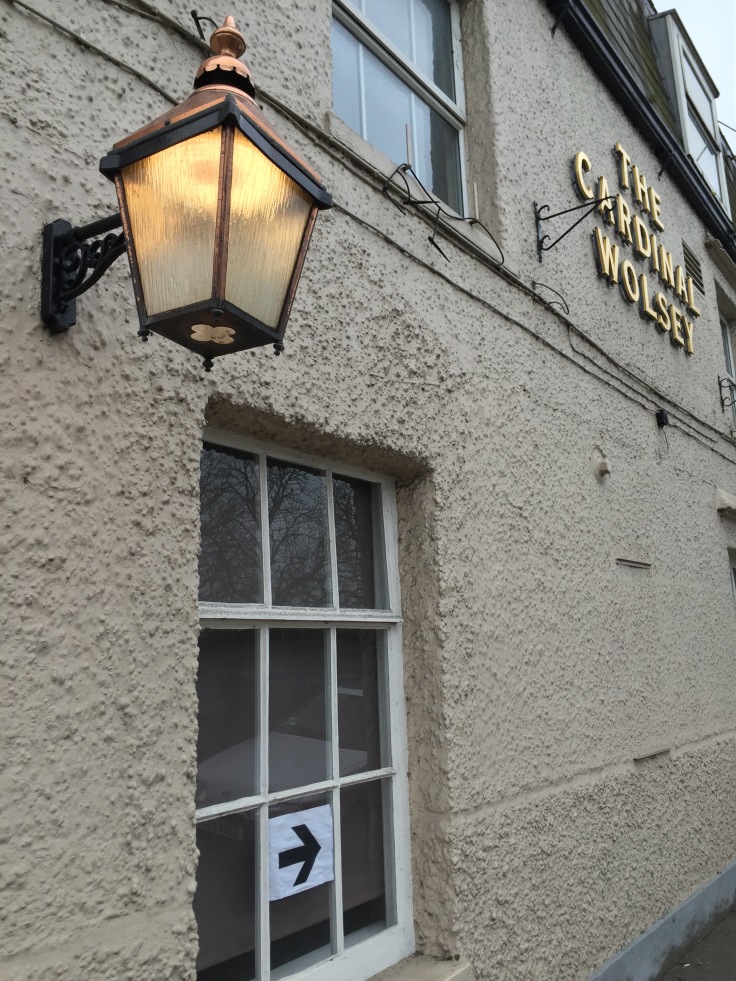 Wait, that black arrow is going in the wrong direction! 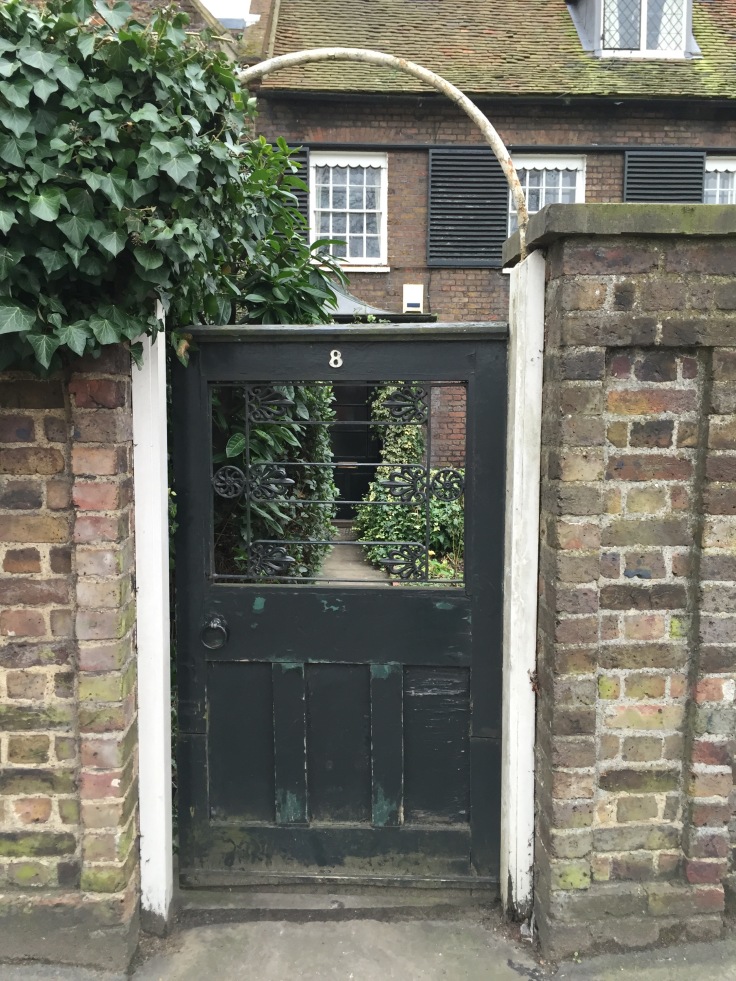 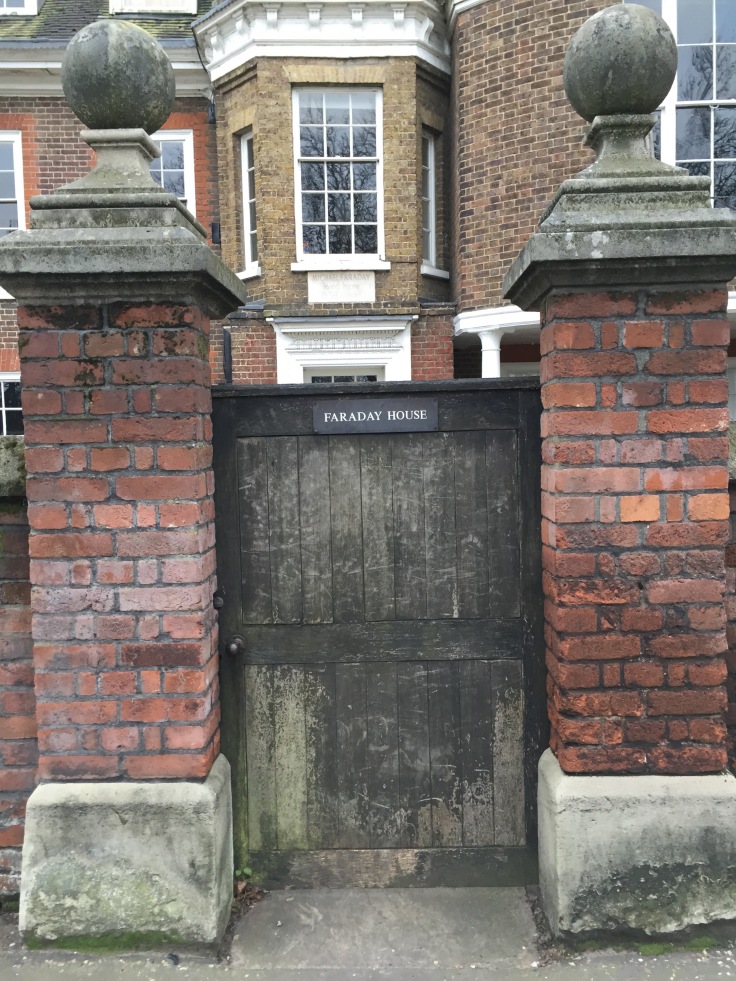 Here are some pictures I took of houses very close to Hampton Court Palace, next to the Green. These houses though grand looking, might not have been so grand. Maybe wealthy merchants lived in these houses. Christopher Wren, who built St Paul’s Cathedral, lived within a stone’s throw of the palace, as did Michael Faraday, who discovered electricity.

You can see that not all houses date from the Tudor period. Most are Georgian. There’s also a working stable whose interiors look quite ancient.

I took a break at 7 km at Hampton Court Palace. If you’ve watched The Tudors, or are watching Wolf Hall, then you would already be familiar with this palace. There are some old Tudor sections, but much of it was also renovated / built over by William and Mary when they were King and Queen of England. Protestant William and Mary were invited to rule England after a bloodless coup that saw the Catholic King James II run away into exile. William apparently liked living out in the country because of his asthma. 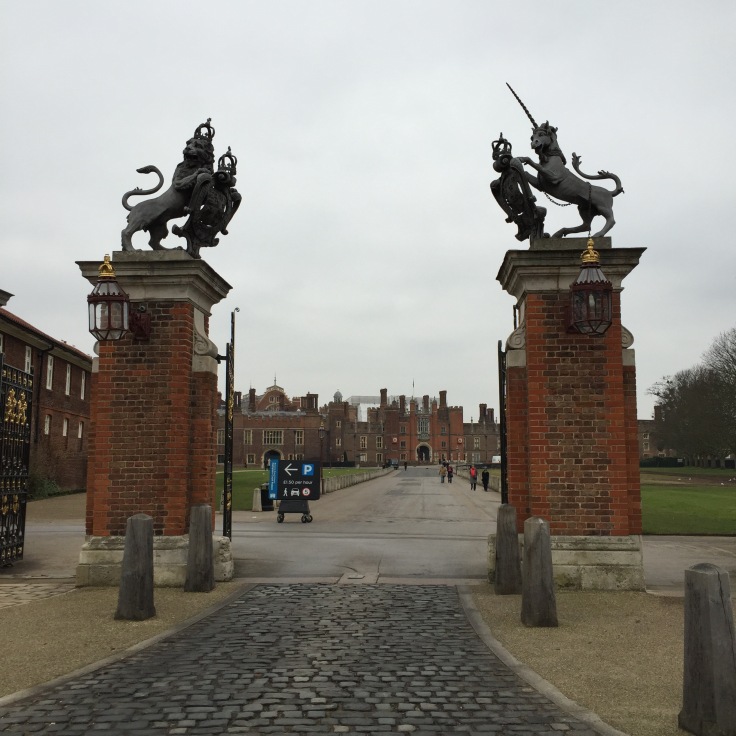 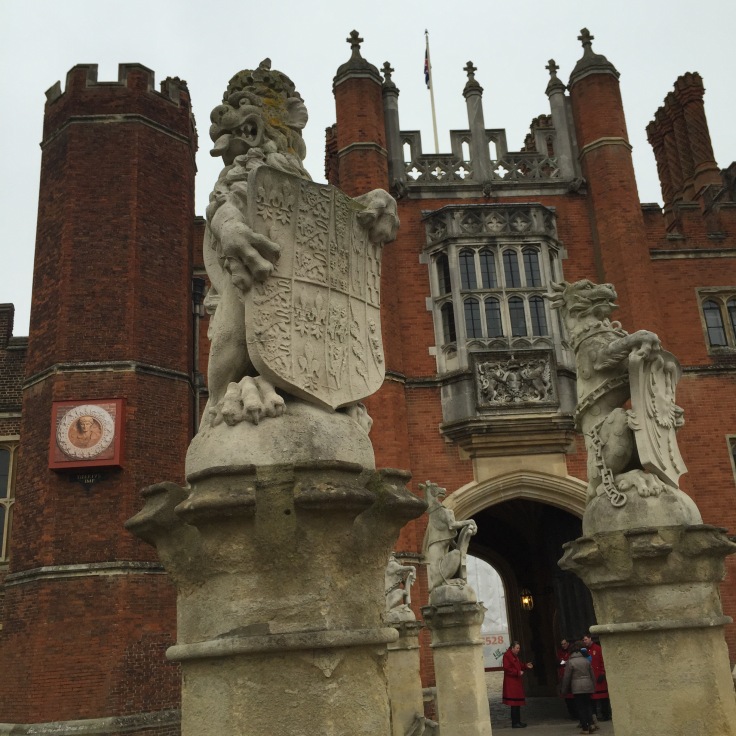 Entrance to the main courtyard. 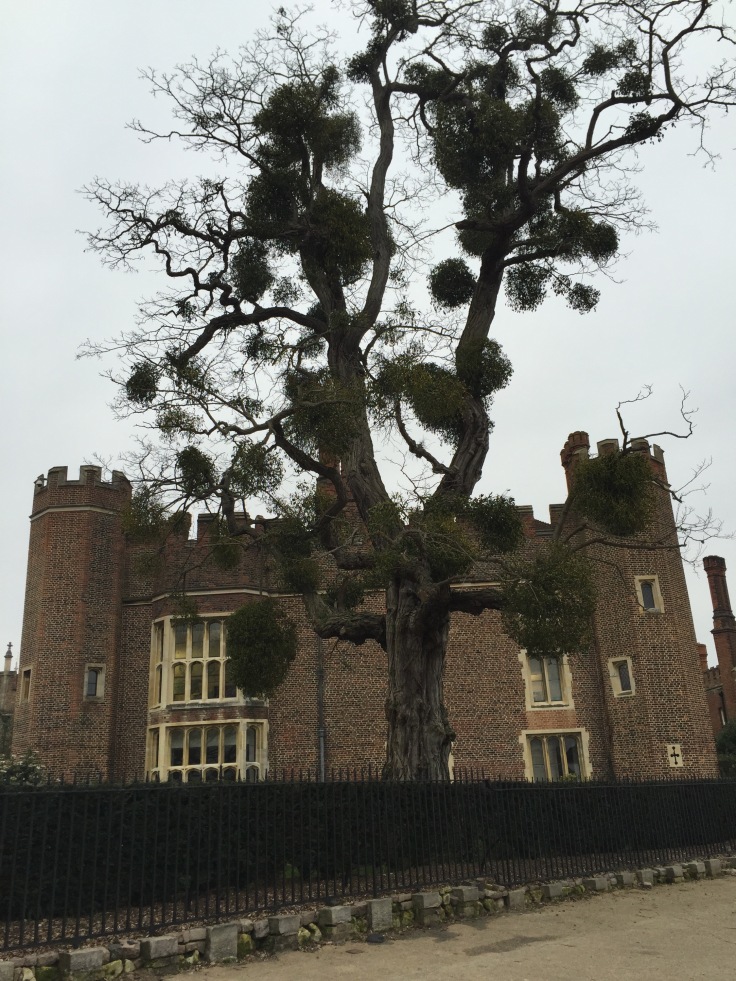 If this tree could speak, what stories could it tell?

Beautifully gold leafed gate to keep the riff raft out.  Palace and formal gardens in the background.

I stopped at the Tiltyard Cafe to get a bite to eat. It is quite a nice cafe though expensive. (A Tiltyard was where they practiced jousting.) I had a poke around to see whether I fancied anything but sandwiches and soup did not appeal. Plus I felt a need to conserve my funds. After taking my comfort break (ie. the toilet), I sat outside to enjoy my water and cashews. The weather had a bite to it, so it didn’t take long for me to start feeling cold.

I followed the towpath winding back towards Kingston, passing some truly lovely houses on the river. Some had been renovated in a modern way and were beautiful to look at. The water looks flat and serene but a closer look will reveal that it’s actually quite fast flowing, 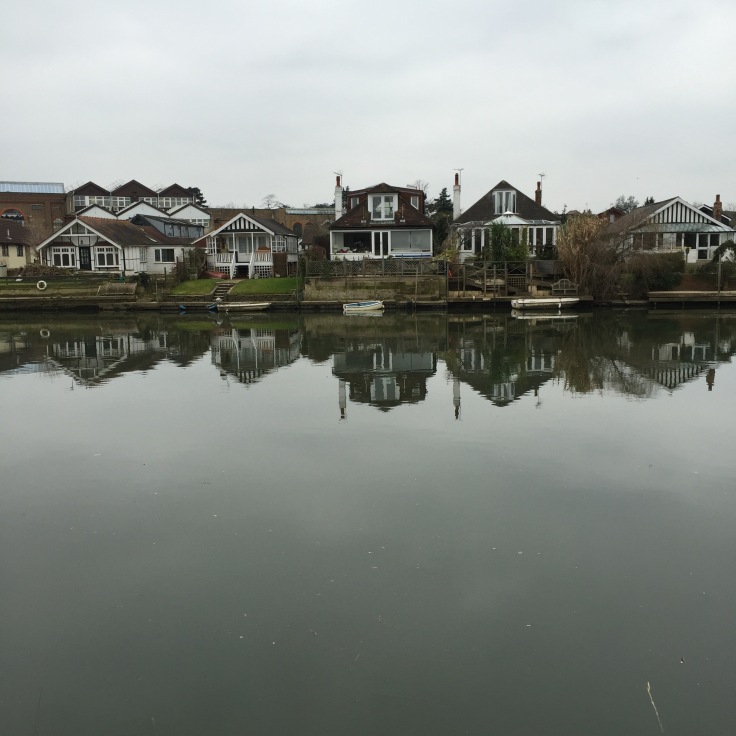 I was terribly hungry by the time I got to Kingston, so I thought a summer roll would be the perfect answer to winter hunger pangs.