School holidays again. This time, I decided a trip to Oxford would be in order. I’ve been wanting to visit for a while. It is, afterall, Oxford. Plus, I thought it would be great fir the little one to have an aspirational goal. It’d be even better if he visited the place and could visualise it fir himself. Not that I’m being a pushy parent, mind you. Just that I believe aspiration and visualisation is key to achievement also.

It’s a beautiful day. Bright and sunny, it’s said to be in the low twenties. Optimistically, I’ve packed a sundress and nice shoes. I hope it doesn’t rain. And yes, I also have an umbrella just in case.

There are lots if kids about. School holidays, remember? I saw a grandma with a kid on a lead. “Like a dog”, the little one says. There’s no dignity in that. And to me, it says more about the person holding the lead than the child. He’s a sweet kid, standing there with his grandma, watching the train go past. He climbs into the next one and promptly sits down to stare at the world outside. He reminds me of the little one when he was 3. I give him a liitle wave and he waves back. What a sweet kid … On a lead.

So we’re now rattling along the tracks, with a change at Reading. It’s not ling trip. Only about 1.5 hours including waiting time. Thank goodness the large group of boys have left the train. They were very noisy, and according to the little one, talked like they grew up in a ghetto. Maybe they did. 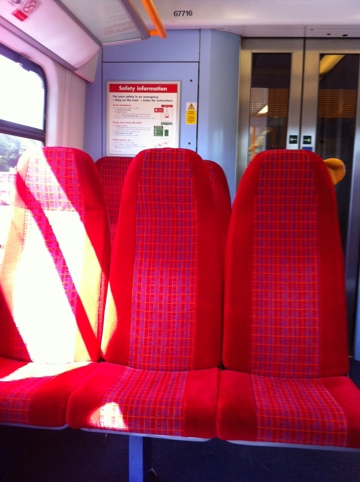