Tunisia is everything you’d expect from a North African desert – flat, sandy, hot.  Stepping off the ship, you could feel the heat in the air.  There was something so familiar with its architecture that I could not place it.  The camels, the camel handlers, the flat topped buildings in the background, and it’s interesting windows.  For a minute, I thought I was a theme park, in particular, the Casablanca section of Warners Brothers World on the Gold Coast.

It was quite exciting to know this was the real thing.  I had come to Tunis quite unprepared.  Actually, I was quite unprepared for the whole trip.  I did not do any research or anything.  I simply rocked up to the ship on the day.  So, all I knew about Tunis was I didn’t speak the language nor did I speak French (a double whammy), I might get ripped off, and how do I get from the Port into the city.  Just some advice to you:  Best to read up a bit on Tunis if you are ever planning to go there, if anything, how to manage the “offering” of services.

The thing about not speaking a language is that I get quite confused easily.  I guess it’s my brain processing what they said (even if it is in broken English and a foreign accent), to what they might mean, to how I might respond, to how I might say it.  Let’s say my brain takes a few extra seconds and this comes across as fuzziness.  It really does.  The problem with this syndrome is you become a very easy target for the many “services” on offer:  from the offer of jasmine flowers that appeared “free” initially to having to pay a family price for it, to the offer of “I show you where it is, no money” to suddenly having to pay an “entrance fee” for the whole family even though you did not want to go in the first place, to taking a government-endorsed taxi service (so you don’t get ripped off) to having to pay “parking fee” and “bambino” fee.  I’m thinking you get the drift…..

Because, honestly, apart from all this, Tunis is quite a cheap place to be in, and it is an interesting city with beautiful architecture.  It is so different from any where else that I’ve travelled in.

We cruised into Tunis at about 8 am.  At Port La Goulette, you can get taxis organised by what appears to be an official agency.  At the time, I thought it was the tourism authority of some kind.  On reflection, who knows?  Anyway, they are much more expensive than if you get a local taxi from the streets, but given I don’t speak Arabic, and clearly look out of place in Tunis, I thought I give them a miss.  For those interested in prices, you can get a taxi from Port La Goulette – La Medina (city) for 40 Euros return, and Port La Goulette – La Medina – Sidi Bou Said – Carthage for 60 Euros return.  Given that the cruise ship was doing an excursion to Sidi Bou Said and Carthage for 135 Euros for the 3 of us, we thought we were getting a good deal anyway with the taxi driver service.

The trip from Port La Goulette passed a flat area of sand and sea.  Everything was incredibly flat.  It was only about 8 am in the morning, and already it was bright and felt quite warm.  Definitely over 30 degrees.  By the time we started to move into the city area, traffic was starting to get quite chaotic.  Reminded me of Bangkok or Bali – cars cutting in everywhere.  Tunis had many modern buildings.  There was a lot of construction going on.  Heck, they had lots of land for it, though there were hardly any trees. Lots of new houses were being built – large with flat roofs.

We finally got into the city and the taxi driver parked.  He had many friends.  People kept coming up to him and wanting to “offer” city guide services.  Architecture was a mix of local and European.  You could see various influences, yet different.  It was crowded, and we kept our possessions very close to our body.  We also kept our son very close to us.

We finally made our way to La Medina, which is the old medieval markets of the city.  It was still quite early and many stalls were not yet open.  The streets of La Medina were small and narrow.  Almost like back alleyways.  There were also many cross streets, leading to other back alleyways.  The long and short of this is, keep walking in a straight line and don’t wander willy nilly, or you’ll get massively lost in the maze, especially if you don’t have a map.  Some of these alleyways can be quite dark as they are covered over.

The whole place was very “Prince of Persia” or “Assassin’s Creed” in terms of its environment.  Market goods were also very interesting, though they kept repeating themselves after a while.  With so many shops selling all of exactly the same thing, how do they make money?  Shoes, clothes, wedding clothes, material/fabric, Arabic silver or bronze ware, ceramic plates, souvenir nick knacks, etc etc etc.  All very interesting, but I didn’t want to buy anything.  For one, I only had Euros, and boy did I feel like I was going to get massively ripped off if I tried.  We got back to the ship later on, and our dinner partners (yes, they shared a story about their day!) said that they bought something and the price started out at 85 Euros, and ended at 10 Euros.  This just gives you a flavour about the place.

It was getting hot and I had enough of the blue alleyways.  Besides, we had 2 other places to see, and I wanted to be back at the ship.  Absolutely did not want to risk missing the boat and getting stuck in Tunis.  Yours truly was also starting to get heat rash, and starting to feel very very crabby.

Next was the village of Sidi Bou Said, which is a village of white houses with blue windows and doors.  It’s quite quaint.  They say it’s been in movies before, but I don’t know what.  Again, the markets were interesting.  We walked around the village, and it had a similar layout in terms of the maze like alleyways.  We bought a big bottle of water for 1 Euro.  Don’t pay more, big bottle is 1 Euro.  They’ll try to get you to buy it for 1.50 Euro or more. 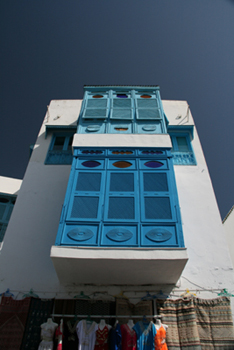 Finally, we went to the archeological site of Carthage, but it appeared rather chaotic.  Certainly not like how they do the Roman Forum in Italy.  Anyway, by now the sun was high in the sky, and it was very bright, and I felt the beginnings of a headache.  This place brings new meaning to the words “hot and bothered”.  Anyway, we decided to skip wandering around the old Phoenician site (or was it Roman) and headed straight for the church, now a museum.  Built with a familiar architectural footprint (ie. nave, transepts etc), it was the colours and decorative features that made the church really beautiful.  They didn’t have too much by way of statues.  Not sure if they were there originally and have been moved.  But the wooden carvings on bannisters and railings were quite lovely.

Everyone was now tired, hot and bothered.  Time to go back to the ship for lunch, a cold cold cold shower, and a dip in the pool.  Yup, it’s moments like this that I’m glad I travel with a little bit of luxury.